Tradition of the Wedding Garter

Back then, especially among families that were bent on getting the next heir as quickly as possible, making sure the marriage was properly consummated was a big deal. Big enough to have the entire wedding party come into the room (hopefully afterwards, but in some cases not) and take a good look at the stocking for, um, I guess some sort of evidence because apparently it was too easy to spill wine on the sheets.

If that wasn't bad enough, the guests would then fling stockings at the couple for good luck.  Because what is more lucky than stinky socks being thrown at you? Bonus points if you're the guest that gets a sock on top of the bride's or groom's head because you were then the next to get married. Has to be true, the socking said so.

But in France, the socks didn't even make it to the wedding bed. Once the bride uttered "I do" (Or rather a form of ‘I receive you as mine, so that you become my husband and I your wife'--only in French', the guests thronged her, tearing bits and pieces off her marital gown because what's more lucky than leaving your loved one in tatters at the altar? Kim Kardashian's idea of having three wedding gowns for the occasion gains a little more merit here. One gown for being torn apart and at least one other for the reception. 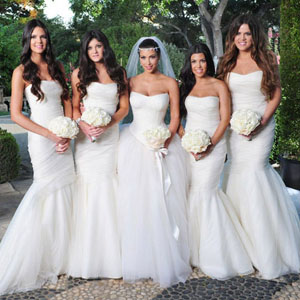 At some point, I'm sure in desperation, some brides decided to start throwing pieces of their attire out, hoping to avoid most of the rampaging at her and her clothing. Which went to finally the groom started taking the garter off and tossing that out. In my romantic nature I like to think of it as the protective groom stepping in to stop the mob in this manner, but who knows, it could have been the brides' idea for self-preservation. Either way, this new less-aggressive, less-invasive tradition began. Thankfully.

At this point the tradition of tossing the bouquet also arouse arose. Ha! Totally didn't mean to type arouse, but I kept it in there because I thought it was a funny Freudian slip.

There are also traditions that state that the garter represents the bride's virginal girdle so when the groom takes that off it's symbolic of what the bride is giving up to him. Who knows who connected the dots on that one but I guess it fits.


But for our modern times, there is little sock throwing and the wedding guests don't go into a frenzy to ruin that $5000 wedding dress.

Many brides will wear two garters both on the right leg above the knee, one for the toss and the other to keep.

The bouquet will be tossed first, followed by the groom removing the garter and tossing it out.

I read that the single male guest who catches the garter then places it on the leg of the single gal who caught the bouquet and superstition states that they will be the next to marry...and to each other. I've personally never heard of that part of it or seen it done, but, hey, they say going to weddings is a great way to meet people. Why not?

Why my sudden interest in bridal traditions? I'm researching for my up-and-coming Chantry Inn series, which will feature several weddings and one long-lost wedding gown. To be notified when these books will be released follow me on Facebook or my newsletter.  See my post on the Traditions of the Wedding Ring.