There's not many better things than writing "The End" on a manuscript you've been working on for months.Second to that is getting through your first round of edits and sending the thing off to your editor. That's where I am now with Highland Illusion.

Out of all the Highland Sorcery novels this one has given me the most grief to write and I'm really not sure why. It's just been a bear. It's also a little different than the rest so maybe that's it.

First, it's less action and more relationship building than how I tend to write. I love action. About 90 percent of this book takes place in the same building. The Same Building! 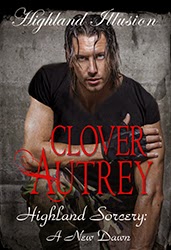 Also for a little switch-up, the hero in this one tends to be the damsel-in-distress more so than the heroine. But he's the only human in the midst of a colony of vampires who are all stronger, older, and predatory. Plus there is no hiding anything he is feeling. The heroine--vampire, also stronger and older than him--can sense every nuance of what's going on internally with him so when he's feelin it for her, there's no hiding where the drop in his blood pressure has gone to.

I also go into religion more in this one. I couldn't help it. In the previous book Highland Son where Lance was first introduced, he is the son of a religious fanatic who preaches that anything with magic is as evil as the monsters running around eating people. Well guess what, Dad? Lance has magic. He can cast illusions, the same illusions that have been saving your butt. So dad tries to kill him. Try coming out of that with an intact love of God and religion. I don't think so.

So who does he become attracted to? A Christian vampire. Yup.

Anyway, it's written, it's off to edits. Want to read an excerpt?


Deverell turned to Lance as the bolt locked into place. “Balius. That is unfortunate.”

I think that you need to check out this blog post for some tips on how to write a great essay. I think that it could be a good place to start