Well, so it was my youngest's Birthday yesterday. Fourteen. Now Tater is his own man. He likes to keep things simple and would rather have me spend money on buying the parts for his computer that he is building. So I got him another part. Should be arriving today.

So simple party. I'm really good with that. I did go over the top and made really cute Tent invites, which he said were too cute. He's not like that and he was just going to tell his friends. "But, but, mom's like to know these things are official," I pleaded said. Fine, but not the tent. So redid them on flat boring paper, which I'm not sure got passed out since only one mom RSVPed. The rest just let their kids text Tater when they were showing up. They did come in to meet me though. Yes, we moms of 14-year-olds must band together in the face of our sons' I'm-too-cool-for-that swaggers. 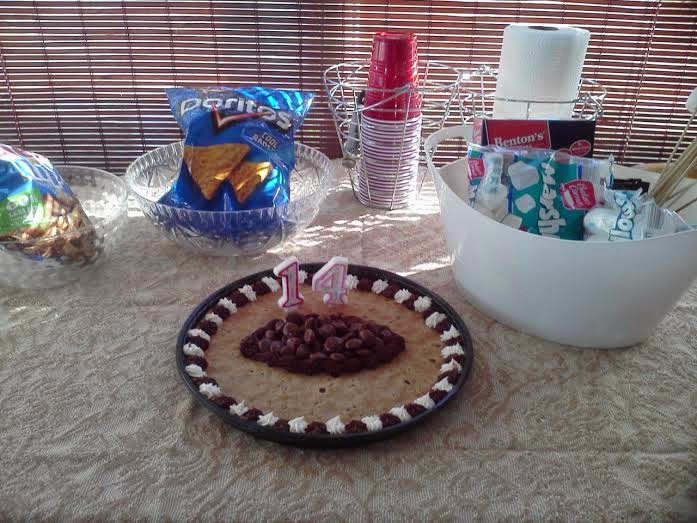 He has four good friends. That's all he wanted to come over for a sleepover hang-out. What do 14-year-old boys really like? Fire. And we have the perfect backyard for it too. A nice porch and woodsy non-grassy dirt that they enjoyed digging a hole for. I also had some long tree limbs that needed sawing. They got right to it. In no time, they had a great fire. They cooked tin foil dinners, roasted little smokies, had pizza, and then s'mores. You wouldn't think a fire could occupy boys so well.

What I didn't take into account was 14-year-olds like to do what their older brothers tell them they've done and that whole group mentality of let's-do-this-it-will-be-awesome and just plain 14-year-olds think they are invincible and sometimes do dumb stuff cuz it's fun even when the adult is right inside, in view, monitoring while also giving them some privacy. I'm looking right at them. What could go wrong?

Sneaky things these 14-year olds. Snuck a can of Axe deordorant spray right past me, stuck it in the fire...

Never heard such a loud bang in my life. It was an explosion that went as high as my house. I came off my chair just as fast. {{{What happened?}}}

The look on their guilty-little-didn't-expect-that-big-of-a-combustion faces. Priceless.

No injuries. None. Thank the Almighty on that one.

And of course several of my neighbors also hearing what they must have thought was an explosion--and they weren't wrong--called 911. A Fire truck began prowling the streets trying to pinpoint where it came from until we went out, waved them over, and explained. Funny thing, they didn't look surprised at what 14-year-old boys do, and just wanted to make sure everyone was all right. One of them even said happy birthday and that it was his birthday as well. I should have offered them S'mores but I was a little rattled after having had an Axe Spray Bomb go off in my back yard to think about it.

What follows is the motherly word of caution:
14-year-olds reading this: Do not try this at home or anywhere else. There can be serious injuries, even death, when the can (any spray can) combusts, from flying metal fragments. Even though I relayed this in a light manner, it was a very serious scary thing that all four boys escaped from through sheer luck and the grace of God, despite their stupidity. It would be embarrassing to die from being an idiot. You don't want to be wearing that sign in the spirit world. Not a cool swagger at all. These four boys will never do something so reckless again.
And yes, as a mom, I tattled to the other moms. We do that you know.