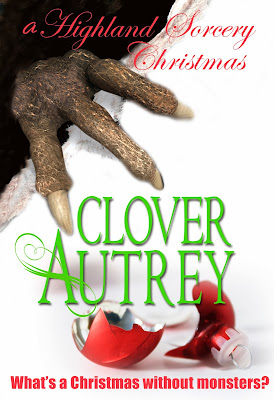 With Christmas and Thanksgiving around the corner, I wanted to have a tie-in holiday tale to my Highland Sorcery novels and this made the perfect segue, giving each couple from the first four books a chance to come back to the same time period and reunite and celebrate just being alive.

The only problem? I don't write fluffy holiday features. Be warned: A Highland Sorcery Christmas isn't your normal holiday fare.

It takes place in two time periods, where the twenty-something son of Toren and Charity (from book one) is now the leader of humanity's survivors. Alexander is so close to weakening the monsters who have replaced humans at the top of the food chain. But when he gets near one of the beasts to test his formula, the monster takes a bite out of him and mentally downloads everything Alexander knows.

Now it’s up to his family to fight for his life in the past and the future if they are to save him and spare the world.

Not exactly your usual holiday get together. There be monsters this season.

The stormy wedge of dirty sky rocked sideways. Tight between Ethan and Dez, Alexander’s shoulders rubbed along their stomachs. His legs bounced, knees bent over their arms as they carried him over the rough terrain.
“It won’t stop. I need another pressure package. Now.” That was Bekah. The hard tension against his stomach released, but just as suddenly came again with more sharpness as a fresh gauze package was shoved against his wound. Somehow Bekah had tucked herself behind Dez and was keeping up with their pace so she could keep pressure on the bleeding gash.
Alexander shuddered, the sweat on his cheek mixed with the dampness along Bekah’s arm, reaching over his torso. The Sift had taken a chunk out of him.
“You’re going to be okay.” Her voice rasped near his head. “We’re getting you to help. Just a little ways more. You keep on breathing, you hear me?”
Breathe. Right. That was important, wasn’t it? Everything narrowed down to pulling oxygen into his struggling lungs, but it hurt.
An iceberg had somehow wedged inside his chest, blocking the air passages and with any attempt to expand his lungs, the icy shards bit into his flesh from the inside out.
The graying world tilted, his head lolling back, falling between the canyons of Ethan’s and Dez’s shoulders as they carried him uphill.
“Richards, run ahead for Lenore.” That was Bekah barking orders again, though she didn’t seem to be talking to him this time. Out of all his aunts, she was the bossiest.
The dusky sky disappeared, replaced by a smudge of gray cement ceiling of the parking garage his Holdout forces used out in the field. His forces. Alexander grinned at that even as metallic tasting blood trickled between his lips. Dez and Ethan had been among the first to believe he had a way to fight the overpowering Sifts, well, after he’d proved himself by saving Ethan’s neck with a shot of sorcerer’s flame. Some days it was good to be the last sorcerer on earth. He should have used it on the Sift today. He just hadn’t seen it before it dropped on him.
“What’s happened?” He heard Lenore a moment before her worried face moved above his. Her voice tightened. “Put him over here.”
Alexander felt himself being swung up into the bed of an abandoned pickup. His head swung with the movement too. Hissing, he curled in around his stomach, but was immediately pulled flat by several hands.
The saturated pressure package was yanked from his side and the pain of it made him blind, his scream caught in stolen heaving breaths.
“What happened?” Lenore’s knees jabbed into his hip where she knelt in the truck bed. Her pixie features strained. “Is this a bite?”
Nausea filled Alexander’s throat. Serrated teeth clamped into him, tearing a chunk of flesh away in a flash of scorching shock and pain. He struggled to get up, get away from all the bodies pressed around him, all the hands holding him down, locked on his arms and shoulders and legs, held fast and vulnerable for the monster to get him.
“Sift got to him.” The slim hands pressing onto his shoulders flexed. “We couldn’t…it was so fast.”
Lenore’s head snapped up, dragging the strands of her hair along his saturated shirt. The ends of her pale hair lifted, tipped in shiny wet red. “But you killed it. Right? You killed it.”
The vibration of collected fear flowed between the group of fighters surrounding him. Being crunched on by a monster carried its own particular horror, one you wouldn’t think could be topped, but when a Sift sank its teeth in you, the nasty beast captured your memories.
“Tell me you didn’t let it get away.”
“It escaped through a hole it tore out of the air,” Dez snarled it fast and hard, the staccato bark of a fired rifle. “Col jumped in after it.”
Lenore jerked back. The press of her knees lifted, preparing to flee. Alexander floated after her, trying to follow all the movement, keep his focus.
The weight on Alexander’s shoulders lifted as Bekah reached across him and latched onto Lenore’s wrists, keeping her in place.
“There’s nothing you can do for Col. He’s out of our reach. But Alexander needs you now.”
The women stared at each other, faces close above Alexander, swaying in and out of his waning focus. It was hard to latch onto anything. He just wanted to get away.
“Can you heal him?” Bekah gritted out and Lenore recoiled like someone waking from a nightmare.
“I don’t…” She flinched again. “Yes. I won’t let him die.” Lips set, Lenore’s hands moved over the cavity that was his wound and Alexander bucked. All the hands holding him pressed down harder.

Also out now and on sale through the month of November, the first 4 Highland Sorcery novels all together for the price of one. See where the adventure begins... 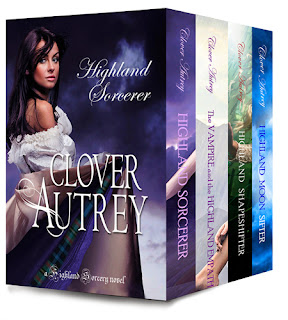 What a great excerpt, Clover! Sounds like an exciting holiday story :)