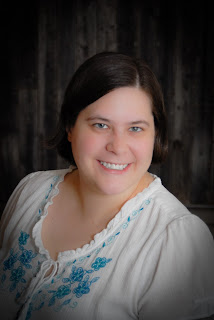 I'm very excited to have my friend and critique partner C.A. Szarek (I know her as Chrissy) visit today as her first book hits the shelves this month. And what a book! Like fantasy, adventure, romance, a protective wolf, and magical sword? It's all in there and then some...

Chrissy's an awesome person, very funny and genuine, and works so hard to get her stories and characters just right. Readers are in for a real treat when they pick up one of her books. I'm glad to know her and count her among my friends. She's originally from Ohio, but came to Texas as soon as she could and I'm sure glad she did.

"What draws you to write fantasy?


I have always been into fantasy, since I was a very young teen and read the greats. Anne McCaffrey and Tanith Lee being two of my faves. It just comes naturally for me, I guess. I'm always in my own little world. But I promise I'm not crazy. *grin*

How many books to you plan to have in this series?

I'm not sure at this moment, but I have ideas, couples and even parts written for at least 5. I should be turning in book two, Love's Call in a matter of weeks to my editor. The I will hit book three. Book 4 is already halfway done. And I have the opening scene for book 5. As usual, I'm on step 1000 when I need to be on step 5. But if something occurs to me, I usually write it down, whether it's notes or a whole scene.


Your heroine is bonded to a wolf in this book and I know you have several of your own four-legged buddies at home. Were any of your own pets an inspiration for the bond between Cera and her wolf?

Well, I thought of the story of Sword's Call literally about thirteen years ago, and I have always had dogs. In a way, the two or three I have sadly lost over the years since Trikser (that's Cera's white wolf) was born are all in him a little bit, I guess.  I have always been fascinated by wolves. They play a big part in this series.

What’s the first thing you do when you finish writing a book?

Take a breather! I tend to binge write so when I finish something, it means I have been doing nothing BUT write. I try to relax, go out to get something I like to eat, or watch TV that tends to stack up on my DVR (GREATEST INVENTION EVER). Then, of course, you get on FB and tell everyone you just finished! Hehehe.

You also have a contempory romance between two detectives coming out soon. Can you tell us a little about that?

Collision Force is about a badboy FBI Agent, Cole Lucas, and a strong female small town police detective, Andi MacLaren getting thrown together to go after a human trafficker that got away from Cole and fled to Andi's small city of Antioch, TX. They don't like each other much, so getting them together was really fun! It's an intense story but it's tender and a little bit funny, too. I am really excited about it because I love Andi and Cole so much! It come out July 1, but will be available for Pre-order May 20 and Pre-release June 3. I should have a cover soon, so of course watch my blog and FB for that! It's also the first book in a series, Crossing Forces.

Connect with C.A. at her blog, Twitter, FB, Amazon, and Goodreads.


A little bit about Sword's Call: 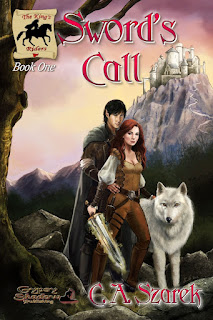 For generations, the Ryhans, ruling family of the Province of Greenwald have been keepers of a sword rumored to possess enough magic to defeat kings. Lord Varthan, a former archduke and betrayer of the king, covets the sword and invades Greenwald.

Lady Ceralda Ryhan, daughter of the murdered duke, gains the sword and flees, trusting only her white wold, Trikser--magically bonded to her. Cera needs nothing more to aid in her fight.

Jorrin Aldern, half elfin and half human, left his home in the mountains of Aramour to find his human father who disappeared twenty turns before, but finds Cera with Varthan and his shades on her tail instead. His dual heritage and empathic magic will tempt Cera in ways she never thought she'd desire. But can he convince her trust and love can pave the path to redemption or will the epic battle end in tragedy and evil conquer them all?

Heart pounding and fists clenched, Cera sat in the Dragon's Lair's darkest corner. By choice the candle on the table was unlit. The bowl of stew half eaten, food the last thing on her mind.

The door to the tavern swung open. Her white wolf growled low and deep beside her. Cera glanced up, squinting in the sudden flood of sunlight. As the door slammed shut and her eyes adjusted to the renewed murkiness, she took in the newest arrival.

Then she focused on Trikser. She couldn't have him going for anyone's throat.

"Shhh, Trik, it's okay." She ran a hand through his fur, smoothing his hackles along the length of his spine. The big wolf looked up at her and licked her hand. One corner of her mouth lifted and she bit back a sigh.

The only reason the owner of the tavern, Marshek even let him in was because no one else was allowed to enter the Dragon's Lair if she was inside without him. No one according to Trikser, that is. He'd almost taken the hand off the last guy who'd tried.

"What'll ya have?" Marshek barked, revealing his instant dislike of the newcomer.

She fixed her eyes on the bartender. Then she took a closer look at the man sitting in front of him. His pointed ears betrayed his heritage, but his height suggested he was not of pure blood.

Marshek was known to be tolerant of elves but he hated what he called half-breeds. Cera could imagine what the grumpy, middled-aged tavern owner was thinking, and it wasn't friendly.

She rose, Trikser also immediately rising, awaiting her move. The white wolf was her bondmate and had been since he was young.

Trik sat, but his body was tight, tense. He didn't respond to her mental order.

Moving to the bar, her wolf followed, slinking close to the floor, moving in a slight crawl. His belly probably touched the filthy planked flooring of the tavern.

Cera made a face but forced a breath. Detached control. Sliding onto the stool next to the half-elfin man, she was just in time to hear his order. His voice was clear and deep. Marshek filled a mug with ale and started to put the jug in its place on the shelf.

With a curt nod, the older man poured her a mug. She brought it to her lips, glancing nonchalantly at the stranger. His coal black hair brushed the collar of his hooded gray cape, giving him a rather unkempt look, but rugged rather than messy.

Cera couldn't see the hue of his eyes from her seat but his high cheekbones made his profile appealing, his sleek tapered ears adding to the attraction. His powerful jaw line was clean shaven, an oddity in these parts. She could tell he was aware of her perusal. He was young, not much older than her, and had the stunning beauty of the elves.

His chest heaved as if he'd taken a breath, and he finally glanced at her. Blue. His eyes were a deep, sapphire blue. Her heart skipped a beat but she ignored it. The man said nothing, not that she'd expected him to.

Chrissy (I mean C.A.) is giving one lucky commenter her or his choice of either a SWAG prize pack (US only on that) or an ebook copy of Sword's Call (International welcome). Hmmm, hard decision.

And the winner is: (drumroll please) Dawn Cloclasure!

Thank you for having me today, Clover! It was alot of fun!

Oh, thank you Ditter! I appreciate you stopping by!

Great interview Chrissy! I love your writing and am inspired by it. Keep up the good work!

Love this interview and excerpt! I'm a big fan of fantasy, and this sounds fabulous, Chrissy. :)

Chrissy, you know I love you. You can come back anytime.

Great interview. Great wolf. And lovely to read how a series grows.

What an interesting book! Enjoyed the excerpt and the interview. Thanks for the giveaway.

WOW! Thank you all for your lovely comments! I appreciate you all stopping by! :)

Congrats, Chrissy! It's cool that wolves play a strong role in the stories. I love wolves. Good luck with your books!

thank you for a great giveaway! :)

Thanx Dawn!!! I have loved them pretty much my whole life.

Thanks for the chance to win!
natasha_donohoo_8 at hotmai dot com

Great post I love the sound of this book.Thank you for sharing with us .Hope you have an awesome weekend.
flanagan@mebtel.net

Take a closer look at this source for some ideas on how to write a better essay using a text editor. This could be useful