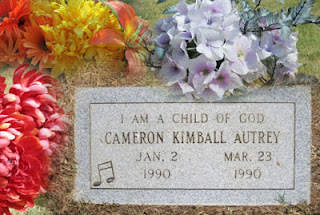 I've blogged quite a bit about my son Chase who passed away from Cystic Fibrosis two years ago, but I've rarely mentioned our first baby Cameron. He was a week shy of 3 months old when he died, our sweet little redhead, our firstborn, my parents' first grandchild.

He had Otahara's syndrome, an extremely rare--one out of a million cases--disorder of seizures. Our neurologist couldn't say what caused it, just one of those tragic things. I read a gazillion books on seizures, and although some came down to head trauma, most in infants couldn't be explained.

I have my own theories. Cameron had a very difficult labor, the induced contractions were too strong and slammed his head over and over against my pelvic. I had the bruises to prove it and Cameron's head was lopsided and bruised for a few days after birth. No one dared confirm that though, probably didn't want lawsuits brought against my pregnancy doctor (who I never ever went back to).

A week later, Cam had his first seizure, a little facial tick I would never have recognized, but my pediatric nurse sister did. Those seizures turned into grand mals, and well... the tragic part is that it was the seizure medication that took him. He was on a strong one that also took away his immunities...and he caught a cold.

I tried to tell myself that it was a blessing. Three months old and he had no development, couldn't even lift his own head. We were already scheduling therapy sessions, but we knew the multiple seizures had already damaged his brain and he'd never have a normal life. But try telling yourself that is a blessing when you're only in your twenties, your baby is in the cold ground, your breasts are still full of milk, and your arms are empty and you just want him back.

I knew it was meant to be though. I knew it before he was ever born--that wonderful, sometimes awful mother's intuition. It felt like my entire pregnancy, his entire life, I was holding my breath, waiting for it to all go bad. I also knew that he didn't want to be on earth. I'd look in his eyes and he wasn't there. Not in that ill, low brain function way of not being all there, but his spirit was literally off to better places, too busy to be bothered with the constrains of an earthly body. There was always the sense of urgent business about him, as though his spirit was so consumed with pressing matters on the other side that just coming to earth to fulfill the requirements of gaining a body, was such a bothersome task. I'd look at him thinking, "Come back, Cameron. Just come back for a while and be with me."

Which he finally did. The day before he died. He was all there. I looked in his eyes and saw an intelligence beyond this life while he fully looked back at me. I didn't realize at the time that it was his gift, his good-bye.

We also didn't know that Cystic Fibrosis was looming on the horizon years later and would take another son.

It's funny, but I often imagine free-spirit Chase, finally able to run and play, dragging Cameron away from his serious pursuits and zigging around the spirit world together.

Happy Birthday, Cam. I love you. Your life was short, but you've never been forgotten.

This was a beautiful post. Thank you for sharing your memories. (((hugs)))

Aw, Clover. You have your own special angels waiting for you in heaven.

My heart went out to you with this article. You are very special in God's eyes because you have gone through the fire. Thank you for sharing this and you are in my prayers.

I pray you have a prosperous and successful New Year.
Ciao,
Patricia

Clover - As the minister said, he was so special, he needed to come and get a body then he was needed back in heaven. He is a very special soul and is with God and Chase. You and Pat will join him and rejoice.