Making of a Cover: Death & Kisses

This was a fun cover to play around with. Much more difficult than usual. This is my first published Young Adult book so just finding the picture took a long time. Since the story is about a girl who no longer fits in with her crowd at high school and also has some dark elements dealing with death and ghosts and revenge, I thought this first picture fit the bill, with this bright flower floating in dark water.

Then I group emailed my siblings. Oh man, I opened a can of opinions. More than 100 emails between us all later, and after one sister pointed out that with the title and the flower, it looked more like a "self-help book to aid people in saying their final goodbyes to loved ones"--Yikes--I scrapped this cover design completely.

The title itself brought even more controversy, but I figured that was good since I wanted something edgy that would make potential readers do a double-take. It has been titled Outcast for about 3 years while it found a literary agent and she tried to place it, that it was hard to let go of that title. If there weren't already so many books and albums with that title I would have gladly kept it. Death and Kisses though. Controversial. I'm pleased. We'll see how it goes.

Back to finding just the right cover picture. It took a while, but this picture finally felt perfect. 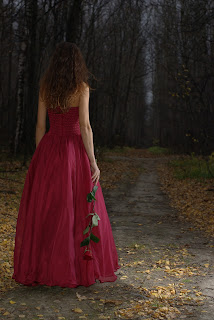 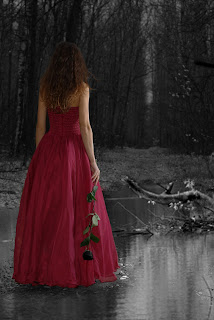 I love the dress, I love how we can't see the girl's face. I love the rose. However, since a haunted pond plays a big part in the story, I wanted water. This is where Smart Photo Editor comes in to change up the background.

We added water to the bottom of the background, but the lighting didn't mesh in the two color versions of both background pictures so we made the background black & white and kept the girl in color and the lighting blended perfectly. It also gave the book a surreal quality, which totally fits the vibe of the story. In keeping with the ghost and death theme, we also painted the rose black.

I wanted the bottom of her dress to be darker so it looks like water is seeping into it so we played around with that on Photoshop. 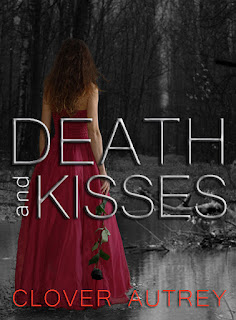 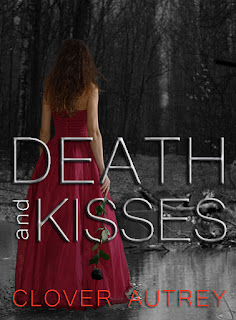 Next step is playing around with the fonts and colors and word placement. I could do that for hours. Then a coworker of my husband's had a brilliant idea to make the flower's stem pop out from behind the letter "S". Honestly, that is my favorite feature and so easy to do once my husband (the Photoshop, Sagelight, Smart Photo Editor genius--yes, he uses all those programs and more for different effects on one cover) showed me how.

At this point I thought it was done. I loved it as is, but no. You know how creative people can't stop dinking  around? A writer will always find something to edit in her book, even after it's published. Well, my artist husband is the same way, so he threw these at me:

Dang it. Now I love both this first one and the black and white background. I honestly could not decide so I took it to Facebook and had my friends choose between them. I paid close attention to my younger fb friends since this book is really for them, and nearly 90% choose the black and white background. I was surprised, thinking for sure teens would choose the color. Just goes to show you, you can't second-guess kids.

The next challenge was to make a version with a spine and back flap for the paperback version. Usually I pick pictures that have a width to already accommodate the extra for the back, like this, but this picture didn't have any, so we either had to find a picture to go with it or simply go with a black back. I found a forest that kind of goes with the original forest so we used that after darkening the trees a bit and converting it into black and white. I also had to redo the title words to make them fit, which meant redoing the flower between the two "S's" this time, but like I said before, that was easy and kind of fun to do, so no biggie. 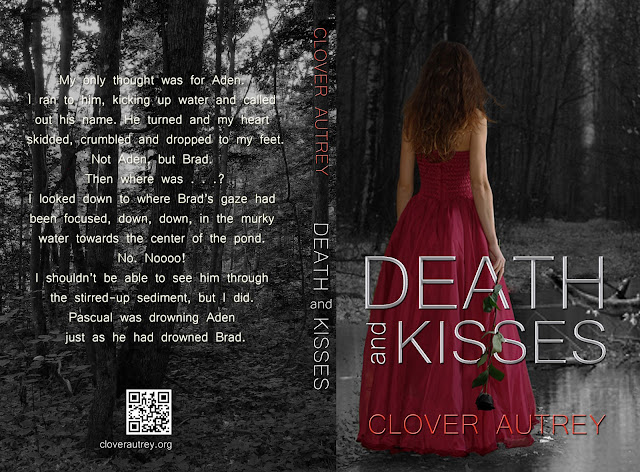 If you have any questions I can help you with for your own covers, just ask me, well, okay, I'll probably have to ask my husband, but he loves talking art...so...just ask.

Oooh, love it, Clover! It's terrific!

It's a very beautiful cover!

I like how the rose is outside of the title lettering, it really makes it stand out.

Clover, what a fascinating post. You are so lucky in your husband--well, probably for more reasons than his great touch with your covers. :) So cool what all y'all were able to do.
If I ultimately, go Indie, I'll be calling for a handholding.

Marsha said...
This comment has been removed by a blog administrator.
Saturday, 10 November, 2012

Clover, I would have FBed or Tweeted this, but I didn't see any buttons to do that, and being a tad :) technologically challenged, don't know how else to send it along.

Thanks guys! Don't worry, Marsha. I love talking Indie, so I'll be there.

Every time you do this it never ceases to amaze me. Wow. So cool. It looks awesome and I can't wait to read it.

Anonymous said...
This comment has been removed by a blog administrator.
Sunday, 11 November, 2012

Thanks PJ and CA. Chrissy, I haven't seen you for a while. The Christmas party seems a long way off...

You know, I love these types of posts. I love seeing a simple stock image turn into real works of art. Great cover!!

I do too. It's always interesting. And of course, Suzan you're a cover artist yourself, so you'd be rocking it.