Vampires come in all varieties.  Some are born as vampires, others must be created somehow.
L.J. Smith’s vampires in the Vampire Diaries series are created. Not from a mere vampire bite, but they have to have drunken  vampire blood themselves and died while it’s still in their systems.
A little different from the classic Dracula myth where a victim becomes a vampire after having been bitten three times.

Richelle Mead’s vamps of her Vampire Academy series, the Moroi are born. They have childhoods, are prone to diseases, age, and die,  however  they can also be turned into their darker evil counterparts the Strigoi.  Best of both worlds.

The vampires of Underworld are created as are Stephenie Meyer’s vampires. 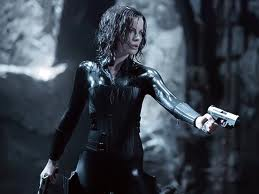 When a writer introduces vampires into a story, all these things have to be considered. Are the vampires going to stick to the traditional mythos? You know, must drink blood to survive, burn in the merest hint of sunlight, and can only be killed with a wooden stake to the heart.

Or will they glitter?

Part of the fun of writing vampires is making your own little twists on the traditional. But whatever myth a writer decides on, she needs to stick to the mythos she created.

What effect does blood have on them? In Twilight, vampires must feed or they weaken. You can tell when a vamp has fully fed or not, by the hue of their eyes. A sated vampire has golden eyes. If a red-eyed vampire is near, you can try to run. The Vampire Academy Moroi use feeders (willing blood donors), and the feeding process acts like a happy drug on the human being fed on. Then there is the blood addiction that can be kicked by a vampire willing to be weaker by feeding on animals instead as in The Vampire Diaries where drinking blood has an effect on how much a vampire can tap into their human emotions.

How does sunlight affect the vampires? Will they explode like the vampires of Buffy, the Vampire Slayer? Or grow sick as in the Vampire Academy? The enemies of the Underworld vamps created nifty bullets made of liquid sunlight that caused some awesome major effects screen deaths.

How a vampire can be killed—if it’s possible—is a major factor. Old school, a wooden stake to the heart. The vampires of the TV series Supernatural have to be beheaded.  Strigoi and Moroi are killed with silver stakes to the heart while staking will only put the Vampire Dairies vampires into a suspended animation until the stake is removed, but the bite of a werewolf will end them in a horrifically slow manner. The Twilight vampires appear to be killed by any blow that is strong enough to penetrate that hard cold granite shell of a body, so they are usually ended by another super strong being like the werewolves or other vampires.

So what variety of vampires do you prefer?

Email ThisBlogThis!Share to TwitterShare to FacebookShare to Pinterest
Labels: vampires

Not much of a vampire fan at all, but glad to see you posting. I've been waiting and waiting. :)

I love love Vamps since I was about 13. And yeah, I love different authors twists on "the old myth." I can't wait to see how YOU do it in your next book. ;)

Making up your own rules is my favorite thing about writing paranormal. I like vampires to be more human than monster. The thing I never liked about the Anita Blake series was how her vampires "died" in the daytime. There's just nothing sexy about a corpse.