The North Texas Chapter of Romance Writers of America has an annual writers retreat every November. For the past two years since I've been a member I haven't been able to go for various reasons, so I was real excited to be able to attend, hoping to get lots of writing done.

So how'd I do? Uh, let's skip over that part for a minute.

Around 10 of us converged upon the Jefferson Street  Bed and Breakfast Inn in remote Irving, Texas. I'm joking. Irving is smack dab between Fort Worth and Dallas (which reminds me of a joke: If Fort Worth is where the West began, that makes Dallas where the East petered out.) approximately about a pig and poke from the old Dallas Cowboy Stadium before it was torn down. Not remote. But it was in the Historic Downtown Irving District and was real quiet and pleasant. There is even a horse painted on the side to inspire a remote atmosphere.

Great times were had by all. We enjoyed two workshops. One with a former secret service dude who waltzed in all innocent looking with several hidden weapons on his body and yes, we all now know how to make a homemade silencer with a baby's pacifier and which guns will go off if accidentally dropped and which won't.

We also enjoyed cringed as Nikki got thrown around the cottage by the multiple Martial Arts instructor and listened to our mild-mannered chapter president exclaim "damn!" each time a body smacked the floor. 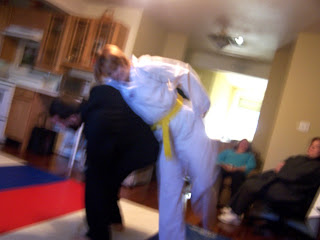 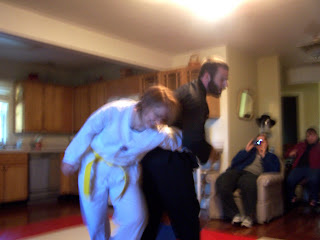 (Excuse the blurriness. They were in motion. Also I kinda can't take a good picture. Hubby keeps sending me how to take good picture links, but, well, here ya go.) 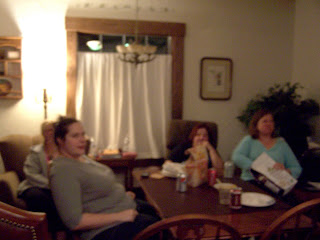 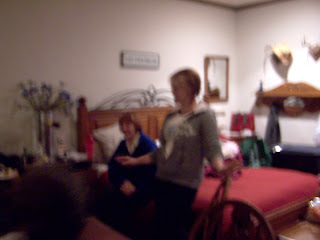 And me? The group as a whole helped me figure out my villian's motivation. It only took the entire Saturday, but after that I was able to write a pivotal scene that pretty much the entire WIP hinges on. Only about 800 words total, but some very vital-better-get-it-right 800 words so I'm happy.
at 2:42 PM

What a great looking group! I'm sorry I missed it.

Yeah "Molly". We missed you too.

Wish I could've gone, but staying home for my daughter's 7th birthday was priceless. Looks like you guys had a great time and learned a ton!

Sounds like you guys had a great time and got some work done!

Sorry I missed it, my granddaughter turned 13 on Saturday and the weekend was hers!

I had a blast, even the getting tossed around bit (though the effects of that are speaking to me now.) lol

Another birthday girl! You're a good grandma.

Love the look of this blog, Clover. Glad you guys had such a great retreat!