Thanks for having me, Clover. Today’s post kicks off my blog tour for December. I’m very excited about the line-up of wonderful guest stops I’ve got coming up. Your readers can check the calendar page of my website for details. Also, I’d like to remind folks that my first contemporary YA romance, Heaven Is For Heroes, is on sale for .99 from now until the end of December. It makes a great Christmas gift for anyone who has a Kindle or Nook on their wish list. Click on the links to buy this sweet contemporary military romance for you or your teen’s cyber bookshelf.
As a bonus, I’d like to offer your readers a chance to win an advanced reader’s copy of ON THIN ICE. Just leave a comment or question for Penny below, and I’ll ask her to pick a lucky winner based on how interesting the question or comment is. Good luck! Contest ends midnight on Friday, December 2nd.
One of the fun parts of creating my characters is getting to know them by doing a character interview. I thought I would share a little bit about Penny Trudeau, my main character from my upcoming release, ON THIN ICE, due out December 15th.
Meet Penny 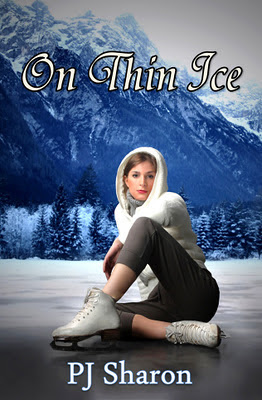 How would your friends describe you?
Hopefully, they would say I’m loyal and that I’m kind of fun to hang out with…when my life isn’t all drama and tragedy, that is. (Shrugs and looks down, face looking strained).
Your teen life has been pretty traumatic. How do you deal with all the challenges?
(Sighs). I don’t think I’m that different from anyone else. I just take things as they come and do the best I can. I mean everybody has problems, right? People make choices that can make life harder sometimes, that’s all. (Face softens and takes on a grin). Like my guidance counselor, Mr. Barstow says, “Everybody makes mistakes. Most people just spread them out a little more.” (Smile disappears, face grows serious again). I guess it helps to have family and friends that care. I’ve realized that no matter what happens, I’m not alone. It took me a while to get that.
You’ve been figure skating since you were ten years old. What do you love about skating and what do you hate?
Wow, that’s a hard question. (Furrows brow and chews cuticle. Then a small smile appears and eyes brighten). I think I love the freedom I feel when I’m skating fast and the wind is in my face. It kind of takes my breath away and makes me feel like I’m flying…like I can do anything. Being good at something gives me a feeling of accomplishment. It’s a lot of hard work, but when I center a spin or land a jump I’ve tried a million times, it all seems worth it. (Smile dims, voice grows soft). As far as what I hate, it’s hands down got to be competing. There is always someone who is better, faster, and stronger. I don’t like the idea of being judged or compared to other people and told I’m better or worse than anyone else. It never makes me feel good to win because I know that someone else has to lose. It doesn’t mean they deserve it less than I do or that they haven’t worked just as hard. It just doesn’t feel right to me.
So Penny, tell us about Carter. You two seem meant for each other.
(Blushes furiously and lets bangs fall over eyes). I like to think so. He’s pretty special.
What is it that makes him special?
Carter is ridiculously honest. Trust and honesty are really important to him on account of his dad ditching him and his mom when he was a kid. Carter wants to see the best in people. If he trusts you, he’ll be a totally loyal friend. But if you betray him, well…let me tell you from experience, he can make some dumb choices if he feels betrayed. But in time, he can be very forgiving…at least he is after he’s had a chance to cool down. (Twists mouth into a smile and cheeks turn pink). I think the best thing about Carter is that when he really cares about someone, he will do anything for them. He’s a really good person to have in your corner, you know?
He sounds like a good guy. Tell us something about yourself that you’ve never told anyone before.
A. You’re kidding, right? Like I’m going to spill my guts to the world. Not that there aren’t a lot of secrets in my life, but why would I tell you guys if I won’t even tell my friends? (Folds arms and looks at me hard. Can’t seem to hold back a smirk…) Okay, so I’ll let you in on a few secrets about what I’ve learned.
Red Bull and chocolate are not basic food groups, school is never as hard as I make it out to be if I set my mind to it, and people lie for one of two reasons—either to gain approval, or avoid disapproval. I’ve lied for both reasons, and neither is worth it.
Excellent advice, Penny. Thanks for hanging out with us. Okay, readers. Feel free to ask Penny any questions you might have about her story or her life. Or leave a comment and be entered to win an advanced copy of ON THIN ICE. Read an excerpt here.
ON THIN ICE is about a 17 yo figure skater dealing with her mother’s cancer while trying to live up to the expectations of her family. Penny has to face issues like anorexia, a teenage pregnancy, and family secrets that threaten to change her life forever. The story is a complex, richly woven tale that deals with the consequences of hiding the truth of who we are, and making sacrifices for the ones we love.
About PJ
PJ Sharon is author of contemporary young adult novels, including HEAVEN IS FOR HEROES, a finalist in the Denver Heart of Romance Molly contest. Her stories have garnered several contest finals, including two awards for ON THIN ICE, and a place in the prestigious Valley Forge Romance writer’s contest for SAVAGE CINDERELLA coming out in the spring of 2012.
On the road to publication, PJ decided that indie-publishing was the best fit for her books. Although the themes are mature, evoking plenty of drama and teen angst, PJ writes with a positive outlook and promises a hopefully ever after end to all of her books. She believes in strong heroines empowered by learning valuable life lessons. Because of this, readers of all ages will be captivated by the emotional and romantic journeys of her characters.
Writing romantic fiction for the past six years, and following her destiny to write Extraordinary stories of an average teenage life, PJ has been a member of Romance Writers of America since 2007 and is an active member of the Young Adult chapter of RWA. She is mother to two grown sons and lives with her husband and her dog in the Berkshire Hills of Western MA. 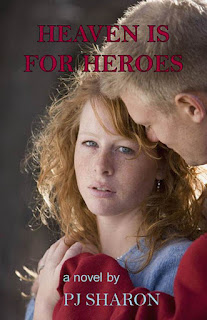 What a lovely post, PJ. Enticing and so real. Felt as though I were right there in the room with Penny!

Thanks Huntley. She is near and dear to my heart, that girl. Let's hope she makes a splash!

Me too. :)You just brought Penny to life! Really can't wait to read it now. I just love the cover. It 's so eye-catching.

Just bought Heaven is for Heroes for my Kindle--can't wait to read it.

Penny, how did you feel when you first found out about your mom's cancer?

Jen! Thank you. I hope you enjoy the story. I loved writing that book! I still think about the characters a lot. You're going to love Alex.

I was only twelve when my mom told me she had lung cancer. At first I couldn't believe it. Not that it should have surprised me with the way she smoked, but you know, you never think it can happen to someone you love. It took a while to sink in. Mom was really tough about the whole thing, so I tried not to be scared, but on the inside, I worried every day that she would die. It isn't something you can hide from for long.

Okay, Penny, why would you say that lying isn't worth it?
Patti

Well, Patti. That seems like a no brainer, but I don't think anybody starts out saying, "I guess I'll lie through my teeth today." Mostly, I think lying starts out as a way of avoiding crap you don't want to deal with--like people's disapproval or a painful reality. But if I've learned anything, It's that lying causes more trouble than it helps.

Thanks for having me and Penny here today, Clover. I'll stay tuned for further questions and comments and Penny will pick a winner for an advanced copy of On Thin Ice for one lucky commentor later this week. See you soon!

What? Red Bull and chocolate are not a food group? I'm shattered.

Thanks, Suzanne. Penny is a hoot to have around but i'm glad when she goes back to the recesses of my mind and gives me a break. Too much seventeen year-old in my head is not a good thing.

Wow, what a great interview, already can picture 17 yr old Penny, she seems so real. My question to Penny would be what helped her get through tough times?

Hi Lorelei, I mean Ms. Buzzetta...um...I guess I would have to say that what got me through the darkest moments was a sense that I wasn't alone. I had friends that I knew I could count on and my sister, Sarah, was pretty cool about everything, but beyond that, I felt like someone was watching over me.

It's hard to explain and I'm not a big fan of church and all that, but when everything feels like it's falling apart, there is something down deep inside that tells me that everything will work out somehow. Maybe it's God or maybe it's just survival, but whatever it is, it helps me to know that tomorrow the sun is going to come up and I'll be okay no matter what.

Check this blog page and you will have no questions left. Cheers!