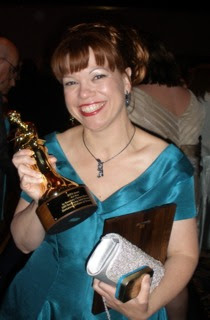 Rosemary Clement-Moore is one of my RWA chapter mates and is also one of the sweetest people you'll meet. She helped me out with the first interview I did for Examiner.com but I wanted to leave a longer version of it here. She is also the 2009 Romance Writers of America’s Rita Heart winner in the Young Adult Category.

A lot of exciting things are happening for you recently. Hell Week took this year’s RWA RITA for YA and you also have a new book The Splendor Falls coming out this week. Tell us a little bit about Hell Week.

In Hell Week, aspiring investigative journalist Maggie Quinn gets around her colleges rule against freshman on the newspaper staff, by writing a story only a freshman can--she goes undercover during Sorority rush. She’s stunned to get a bid from the most exclusive, successful house on campus--but there’s more to the Sigma Alpha Xi’s than fraternity mixers and study parties. There’s something supernatural going on, and whi

le Maggie’s targeting them with her girl detective mojo, something truly fiendish just might be targeting her.

I once saw a mother have to prod and practically pull her daughter over to speak with you because the 13-year-old was completely star-struck. You were so sweet to her. Is that a typical reaction from your fans?

I get reactions across the board. Some girls are flustered, some talk a mile a minute. I have to admit, whenever I hear a squeal of excitement, I always turn around to see who’s standing behind me. I suspect some of the shyness isn’t just star-struck-ness, but also that I’m a grown up, and they may think I don’t have time to talk to them. The secret is, I don’t feel much like a grown up, and I love to talk to readers, especially teens. One of the things I love best is when a girl tells me she feels like she’s found a friend in my character, or that she identifies with Maggie because she loves books, or because she’s a bit of a nerd, but still very happy with who she is. That’s the more rewarding than anything.

The Splendor Falls has been described as a modern gothic romance. Can you tell us more?

In the classic gothic novel, there are elements of horror and suspense in a gloomy old castle or ruin full of buried secrets and lurking dangers. The Splendor Falls follows the traditions of Daphne du Maurier and Mary Stewart, but with a thoroughly modern heroine. Sylvie is grieving the end of her dance career when she’s shuttled off to stay with her late father’s cousin in Alabama, in a ramshackle antebellum mansion where the past is a little too alive. When she starts seeing things that aren’t there--a girl in the woods, a watcher at a window--are these really ghosts, or is she losing her mind along with everything else?

You've been the driving force to get a Young Adult chapter of RWA established. What kind of benefits will this specialty chapter offer to authors?

The Romance Writers of America has a lot of practical advice and resources for published and unpublished writers of all sort of fiction--not just of what you think of as a Romance Novel (i.e., the clichéd couple in a clinch on the cover). A romantic subplot, after all, is hardly limited to one section of the bookstore, and the principles of writing apply across genres.

The purpose behind the YA chapter is to share information that’s more specific to authors of books aimed at the teens and young adults, considerations both in craft and in marketing. The YA genre is extremely strong right now, not just with teens, but adults, too.

If you’ve never read anything from the teen or YA shelves in the bookstore, you might be surprised by what’s there. It’s not all teen vampire romances. (Not that there’s anything wrong with those!) But “Grown ups” often dismiss something because it has “teen” on the spine. A young protagonist doesn’t mean it’s a “kid’s book.” The best novels are those that offer something to readers of every background and age. I got a letter recently from a woman who said she, her mother and her daughter all loved my books. What’s more awesome than three generations of fans!