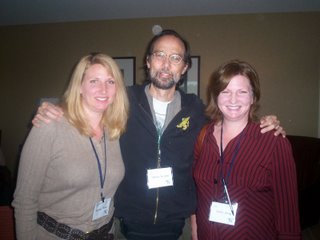 Friday
I swear I am just going to hang out at the elevator. Ride it up and down, up and down, because I keep meeting the kewlest people. I am not so ditzy today, but still extremely friendly and outgoing. As Heather and I are walking down the hall from our room, two sets of couples strolled out of their room ahead of us. Being friendly, we just start talking to them, get on the elevator, and big ears me hears them talking about a con suite, so I pipe up, “what’s that?” Very kindly, this tall, sweet, hippie/rocker looking man tells us it is a suite that anyone from the convention can go to and hang out in. Follow us, we’ll show you. So we get off on the third floor with them and are chatting all along the way, names are exchanged but I just hear Charlie and not the last name, and it doesn’t matter cuz we’re all just having a great time conversing, until we get in the room. There is a very nice spread of food, but I don’t notice that because I glance down and read Charlie’s nametag: CHARLES DeLINT. Charles DeLint! Mister big time sci fi reviewer, so knowledgeable. I knew he would be here, but I also knew that even if I glimpsed him from afar, no way would I ever have approached him, cuz he would be so far above me. That’s what I had envisioned, but here we were, by a simple stroke of fate, chatting with Mr. DeLint and he couldn’t have been more personable and kind and enjoyable to talk with, and his wife is a delight, very pretty and eager to show around and welcome two newbies into the con suite and introduce us to other big huge famous people. And even though it became obvious that I didn’t know some of the big writer’s works that were there (I found out later and OMG I was in a room with greatness) yet there was no judgmental vibe coming off of him. He couldn’t have been more accepting. And what I found most charming was how he spoke of his band and how they were going to be playing that night, but he didn’t know where. His eyes lit up, just like my DH’s do when he starts talking about a gig. Unfortunately I couldn’t find where they were playing later that night. I even braved the other con suite, which was so packed and with no music coming out of the door, that I just backed out gracefully, totally out of my element in a room full of people that knew each other, and I knew none.
at 5:43 PM

Email ThisBlogThis!Share to TwitterShare to FacebookShare to Pinterest
Labels: and me, Charles DeLint, Heather

Clover, it sounds like you had too much fun!!!!!Poor unread me, I'm still stuck on Louie L'Mor...I guess I need to converse with you more on what you are currently reading....VK